Check out our final concept:

Grill Spot is the one stop shop for having a great barbecue. 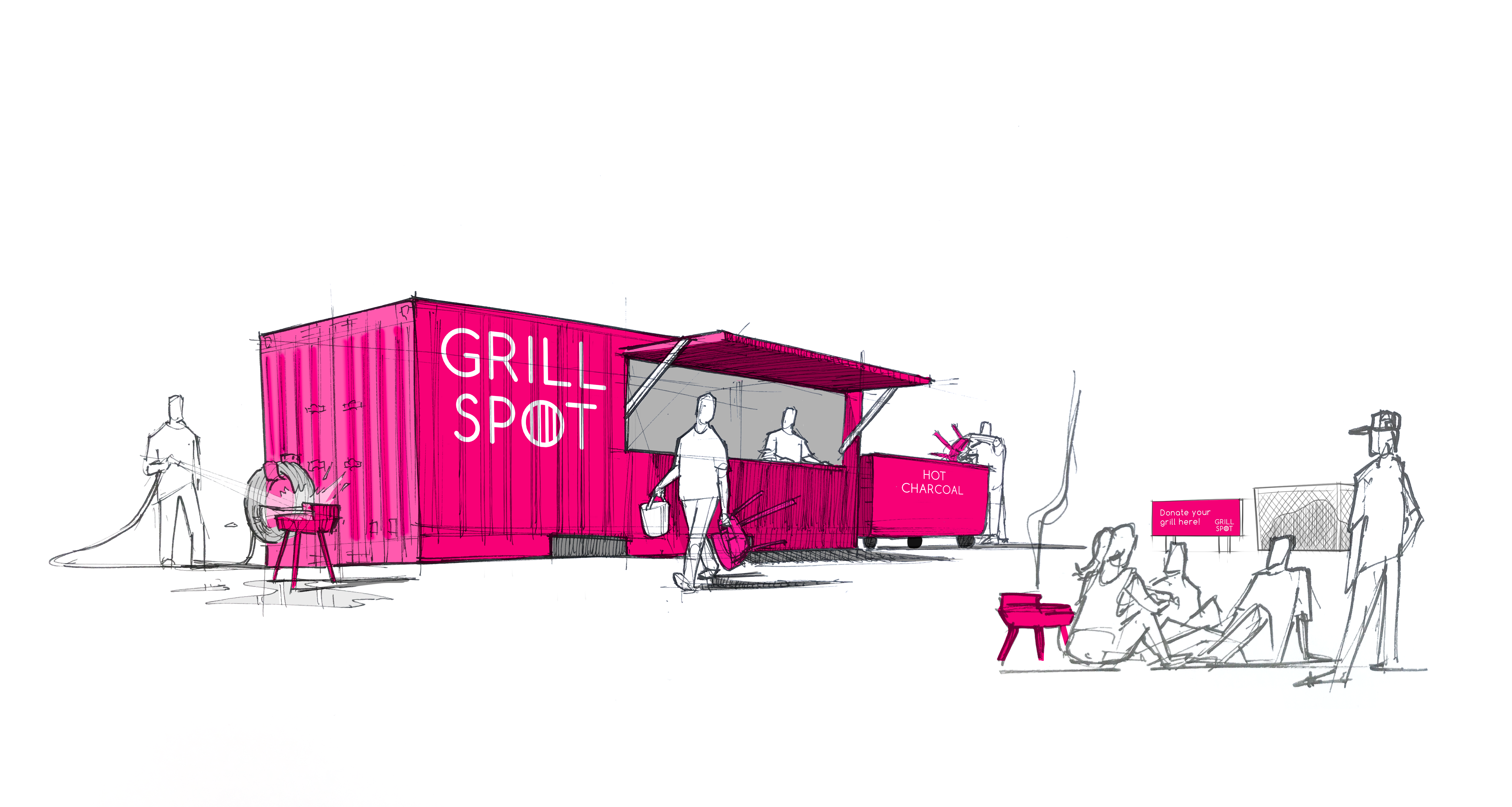 Grill Spot is constructed from a standard shipping container so that the grills and charcoal are protected from weather and can be easily locked up at night. These shipping containers are already being used for small kiosks in parks throughout Berlin.
With this service, Berliners can meet their friends at the park for a barbecue and all they have to bring is the food they want to eat.
Let’ s see how it works: 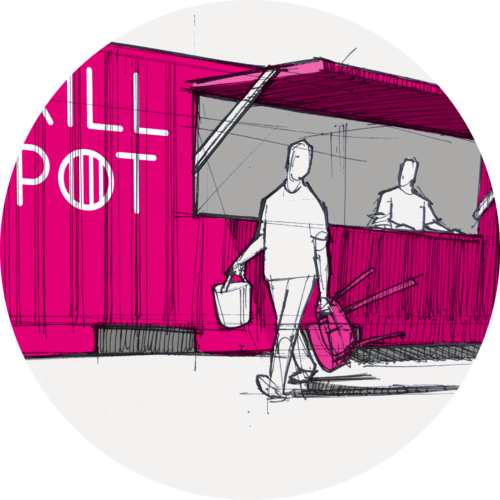 When you arrive in the park you will find the Grill Spot in the centre of the barbecue area. Here you can loan a barbecue and buy charcoal. 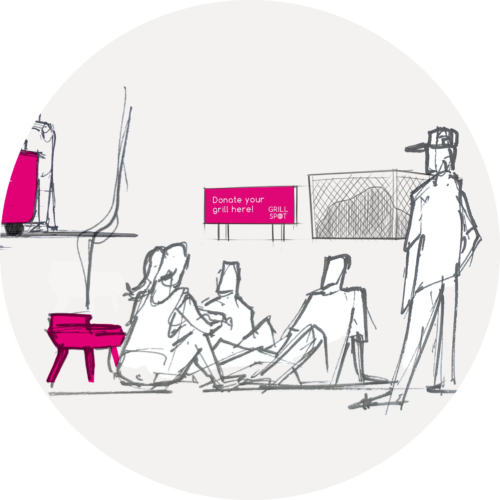 The bright pink color of the grills indicates that they are to be shared with others when all of the grills from the Grill Spot are in use. Opening up the barbecue group through sharing a grill encourages forming new relationships. 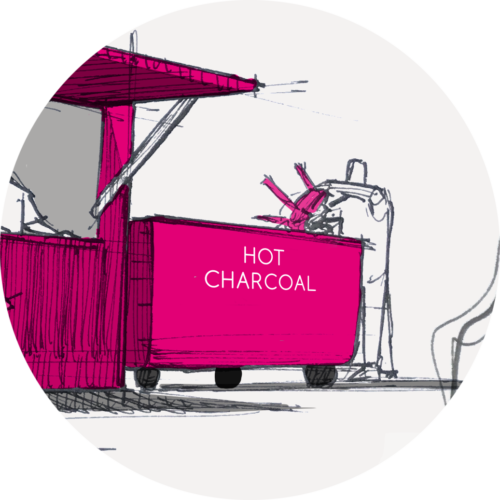 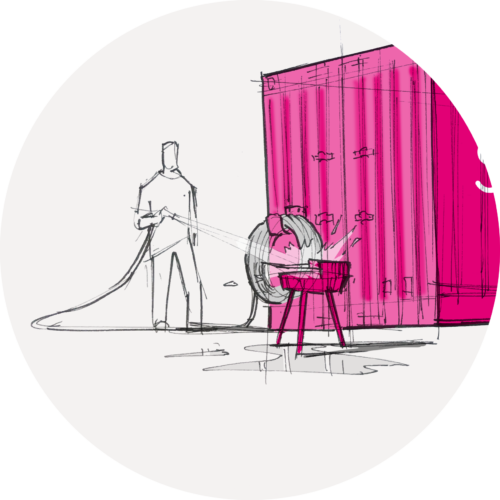 No need to clean the grill, Grill Spot will take care of that for you! 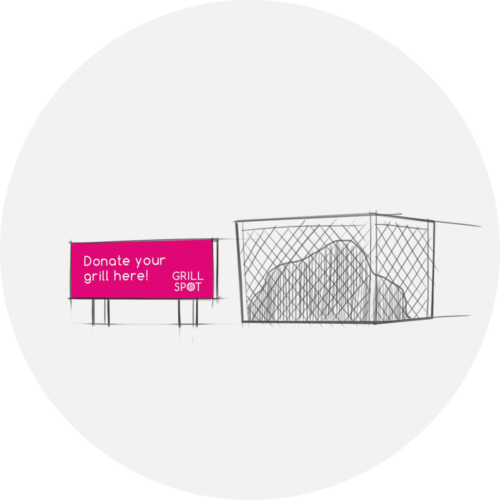 Park goers can donate a grill to the Grill Spot instead of throwing it away when it’s no longer needed. Grill Spot will collect it and paint it . This way, other people can continue to use the grill again and again.

This could be implemented in Tempelhofer Feld, a park in Berlin that the city is already investing in as a public amenity. This system creates a grilling experience that will attract more visitors to the park. The charcoal vending machine will help generate money for the project.
Grill Spot could employ people from social integration programs or pension volunteers. This system could also be part of a sponsored partnership with a food or drink company (Fritz Cola, Lemon Aid or Berliner Bier for example).

After we did our experiment we created this concept for reducing the waste of grills. 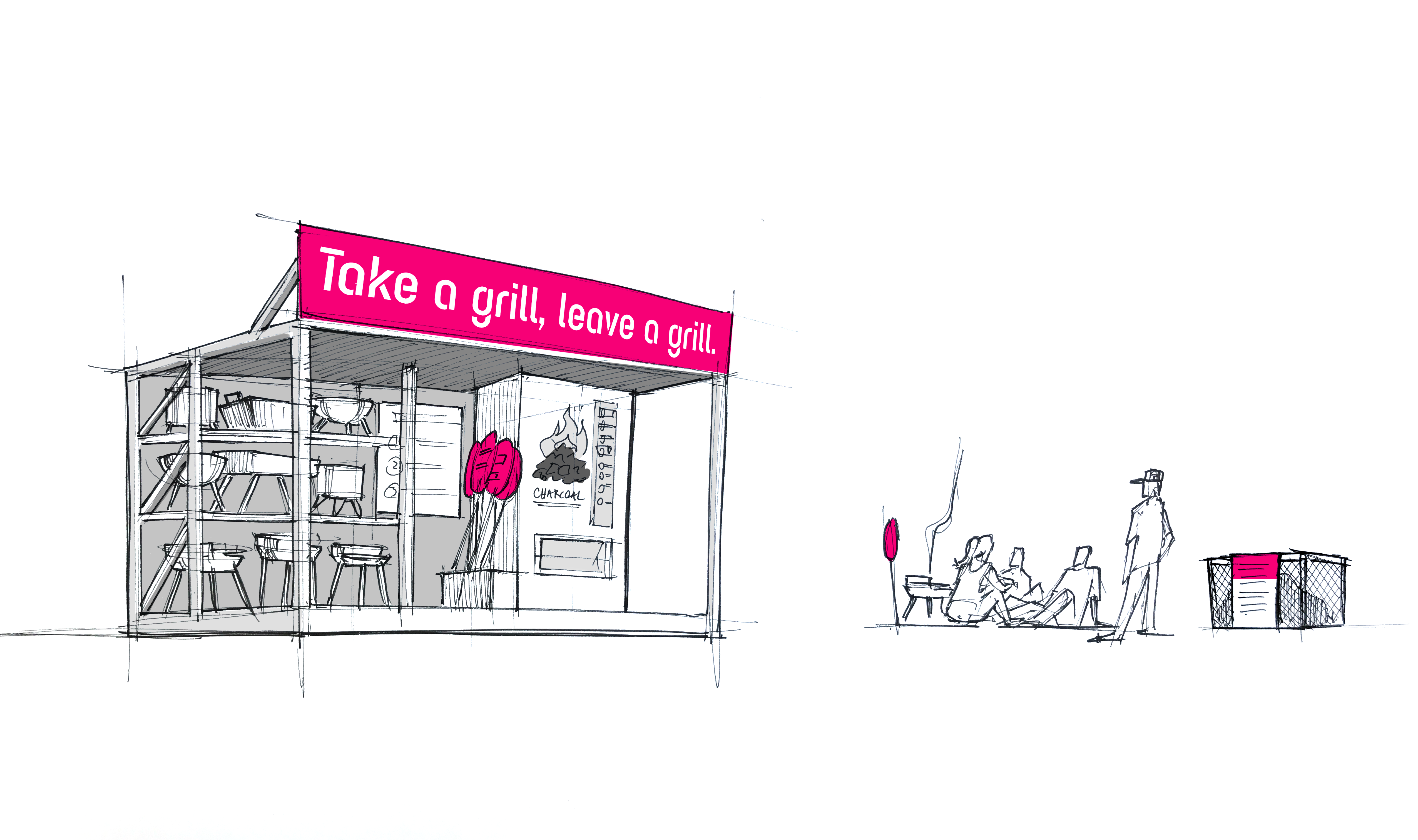 Park goers can leave a grill here instead of throwing it away when it’s no longer needed. This way, other people can continue to use the grill again and again. A small shelter helps to protect the grills from rain. Users are encouraged to take a “Shared grill, join us!” sign. This allows multiple groups to use one grill when all of the grills from the shelter are in use. Opening up the barbecue group through sharing a grill encourages forming new relationships. For added convenience, users can also buy just the right amount of charcoal from a vending machine.
This could be implemented in Tempelhofer Feld, a park in Berlin that the city is already investing in as a public amenity. This system creates a grilling experience that will attract more visitors to the park. The charcoal vending machine will help generate money for the project.

We were curious to see how people would react when we opened our bbq group. One group next to us asked if they could use our grill to cook their ribs, and we also got a thumbs up from a girl walking by.

Half way through our barbecue, we ran out of charcoal. We decided to try trading an extra beer we had to another group for some of their charcoal. They were very kind and didn’t want to accept the beer – they let us use their charcoal for nothing in return. Aside from this, It seemed that during a bbq, people are already in their small communities. Not everyone is interested in interacting outside of this community to create a new relationship. Instead, could this be successful with smaller groups of one or two people?

In addition, if people don’t know that this exists when they come to the park for the first time they wouldn’t know to bring food to the park. However, after this sort of system is permanently implemented in a park, people will be able to visit the park again knowing that they can bring food and use a shared grill.

Experiments in Görlitzer Park and in Volkspark Friedrichshain

Some questions we had before the second experiment were:

“Are people willing to use a grill that has already been used?”

Initially, people passing by read the sign and seemed to be surprised and delighted. Many people even stopped to take pictures.

In this park, there is no easy way to dispose of hot coals. Most coals are thrown in bins with other trash which could start a fire if the coals are still hot. Some people emptied their hot coals into the grill that we left by the sign.

One group did leave their grill here partially because they didn’t want to deal with the hot coals but also because they liked the idea that someone else could use the grill when they didn’t need it anymore.

We wanted to observe different kinds of food-community gatherings happening in Berlin. Thai Park is a great example of a cultural food event that brings people together.

Here, we noticed that:

During our experience barbecuing in the parks In Berlin, we observed that Berlin’s biggest problem is a waste of resources: food, disposable grills, and regular grills. One way to reduce this waste could be to encourage sharing resources. By promoting sharing, we hope to create a stronger community.

Barbecues are already community moments and some groups already interact each other. For example, some guys asked us for charcoal, we asked the group next to us for some ketchup, and they offered us the bread they had left. Despite this, some borders still exist among certain groups.

How we can create more interaction in this situation and move from simply trading to sharing?

We used play mobile figures to represent different members in the barbecue/park system. Exploring these connections allowed us to identify opportunity areas to intervene or improve. This was a good way for us to recap and interpret the relationships between park goers that we observed. 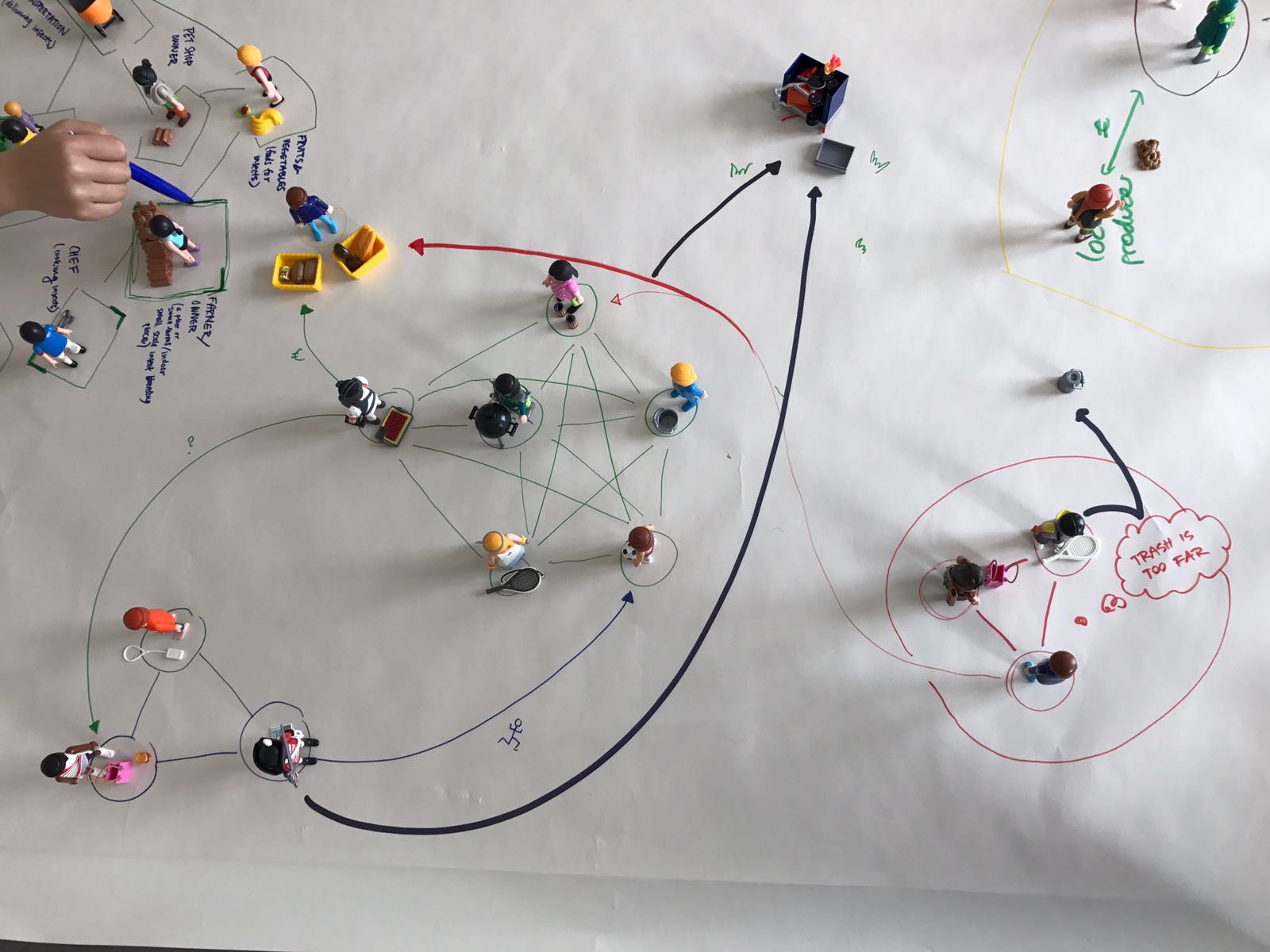 A Swiss, an Italian, an American, and a Kenyan cooking ugali in a Berliner kitchen.

Shabu told us that at the beginning he was not able to prepare food in our kitchen. It’s hard to get used to other cultures food habits/ systems when your culture is so different. For Cristina it was difficult to eat with her hands 😛 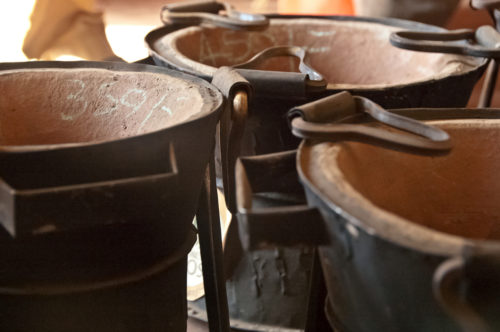 The Kenya Ceramic Jiko, is a stove which uses charcoal as fuel. It has an hourglass shape, and it is made from a metal exterior, with a ceramic internal liner. The ceramic liner has holes in its base, which allows ash to fall through and be collected in the box located at thme bottom of the stove.

We had a closer look at the traditional way of cooking in Kenya and we learned a lot about the jiko. To get to know how people in Kenya are using it, we had a talk with Shabu.

After talking with Shabu, a Kenyan artist from Nairobi currently living in Berlin, we were interested in the many problems concerning food in the slums. We began by exploring a broad range of issues about food from cultivation to consumption. Going further into this topic, we narrowed our research to focus on clean cooking.

The goal of clean cooking is to:

Our research also included looking at existing solutions that either improve the traditional way of cooking or are focused on using sustainable resources.

You can remove these sidebars and add your own under Appearance > Widgets or in your theme customizer located in Appearance > Customize.